A few days ago I rode Andy Corless’s infamous Mille Pennines 1000 km audax in the north of England. It was my first ride over 600 km, and my first ride where sleep is a serious consideration.

It was a seriously challenging ride, both physically and mentally, but certainly worthwhile. Here are some reflections.

I’d promised myself beforehand that I wasn’t going to worry about setting a good time or riding a fast ride, and that I would just chill out and enjoy the scenery (Ha! Little did I know what was to come…). I therefore made the mistake of not jumping on the express train from Bispham, and ended up pootling along on my own for most of the first day. In retrospect, getting a free (or at least cheap) ride in a bunch would’ve got me a bit of extra sleep.

Besides the relatively tame climbs of Whinlatter and Cold Fell, the ride was pretty uneventful (and wet) up until the first “real” climb at Hardknott. I was hoping to do it in the dry, so when I rounded a corner at the end of Eskdale to see the red lights of distant bikes crawling up a diabolically steep thread of tarmac and vanishing into the cloud, my heart sank. 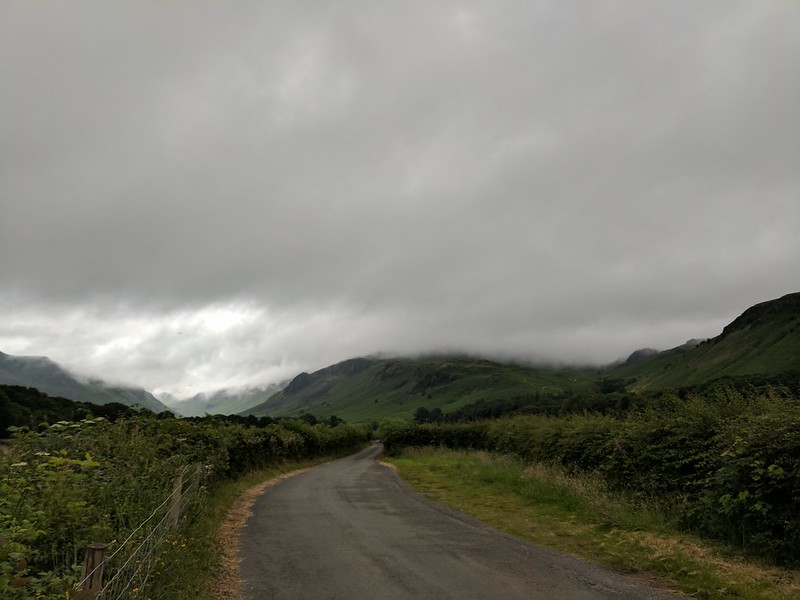 After hauling myself up the worst-paved climb I’d ever encountered (this was to be topped at Littlebeck two days later), a motley band emerged out of the fog, including Alex, Magnus, and John: 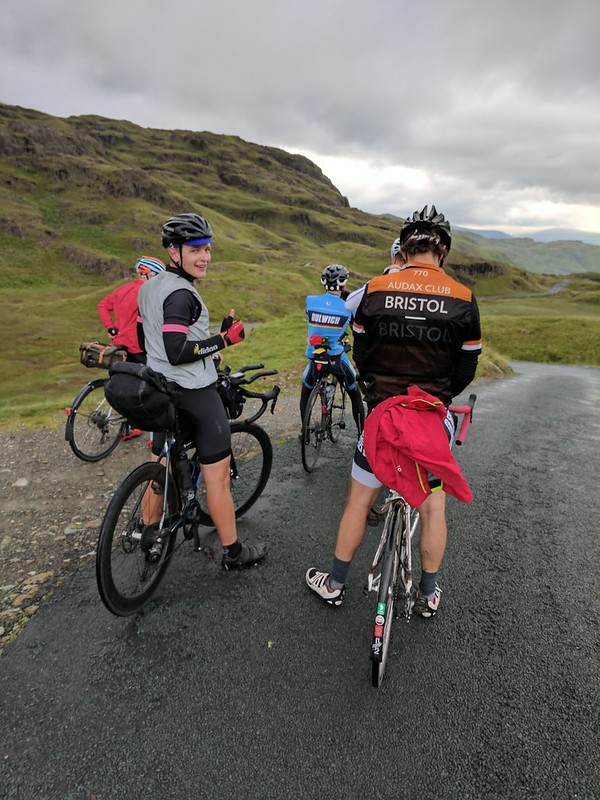 We continued together and managed to find the only venue still serving food when we arrived in Windermere at about 21:00. Having refuelled on pizza, we continued to Sedbergh, arriving just after 23:00.

After a shower, a chat, and a bite to eat, I lay down on an airbed just after midnight. I got up at 04:00 having slept for not much more than an hour, thanks to the arctic temperature in the sports hall and the incessant and impossibly loud tossing and turning of someone in his space blanket. Not a good start to the weekend.

I set off at 05:00 with a chap named Kelvin, who hadn’t managed to find the GPX routes in this thread and required some guidance. I knew there would be some climbing at the beginning of day 2, but I really underestimated just how much. The first climb of the day – the Buttertubs – provided some lovely views down Swaledale: 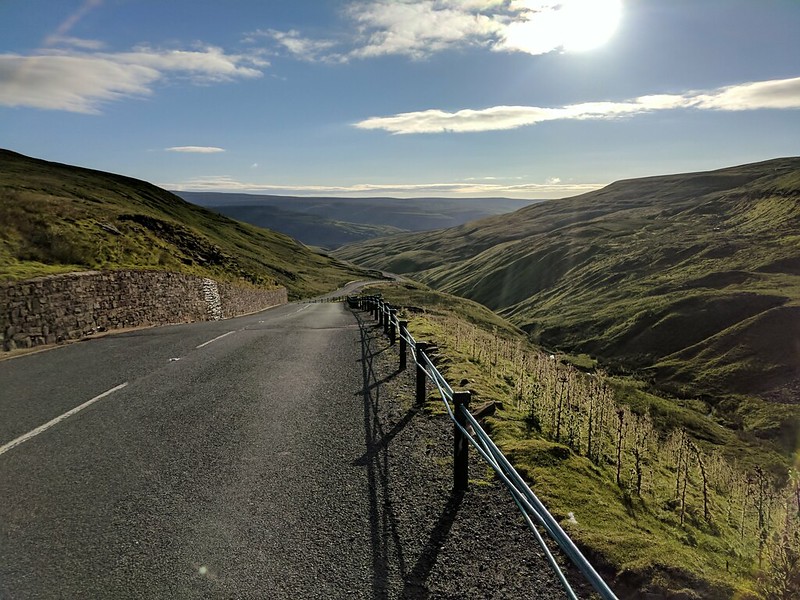 We reached Stanhope after what seemed like an eternity of ups-and-downs, including the fabled Stang, as used in the 2013 National Hill Climb Championship. Nonetheless, the sun was out, my spirits were high, and my legs were feeling pretty good at this point, so Kelvin and I parted ways and I pushed on for Kielder in the midday sun.

At this point, my average speed was worryingly low. On turning west, the wind set in and the faster progress I was hoping to make after the hilly first half failed to materialise. The beautiful scenery of the Scottish borders helped me along: 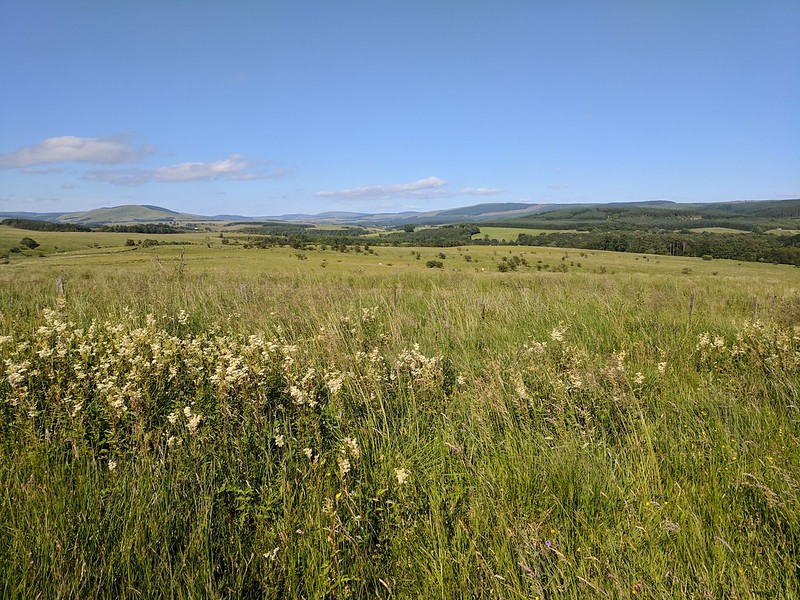 However, by the time I hit the A7 to Carlisle, my spirits were pretty low. The going was easy, but there was no nice scenery here to distract me from a throbbing knee and sore body parts. I passed through Carlisle at 20:30 in the evening sun. At this point, I bumped into John Rye, the originator of the GPX routes so helpfully posted on YACF 🙂

He gave me the very good news that this leg of the route was 335 km, not 360 km as I had thought. Thank goodness. That meant at least an hour more sleep than I was expecting. Spirits lifted by good company, we pushed on through Penrith, and John peeled off to his alternative accommodation. Under the M6 and into the beautiful Westmorland Dales in the dusk. A couple more hops over and under the M6 and I was in Sedbergh before midnight.

I didn’t really know what to expect for this bit, except that it included a nasty climb called Rosedale Chimney. My knee had been giving me trouble the previous day, so I was trying to come to terms with the prospect of a DNF. Nonetheless, I hopped on my bike and set off gently, slightly late at around 06:00, tagging along with Ken Mcbride and fellow Tripster rider Allan Caple. A nice tailwind, plus Ken’s efforts on the front, carried us swiftly to Yarm, where we stopped for brunch at the excellent prison cafe (official control next year?): 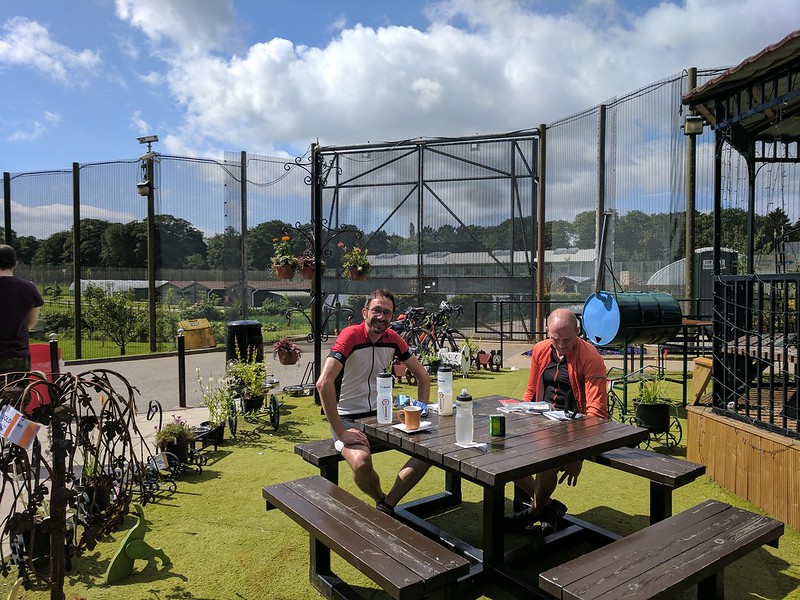 After Yarm, we entered the North York Moors, where began the climbs. They were steep but not unpleasant, and we made it through to Robin Hood’s Bay for a late lunch at 15:30. The staff at The Fish Box were a bit grumpy, but the fish and chips they served was sublime; probably the best audax meal I’ve had. 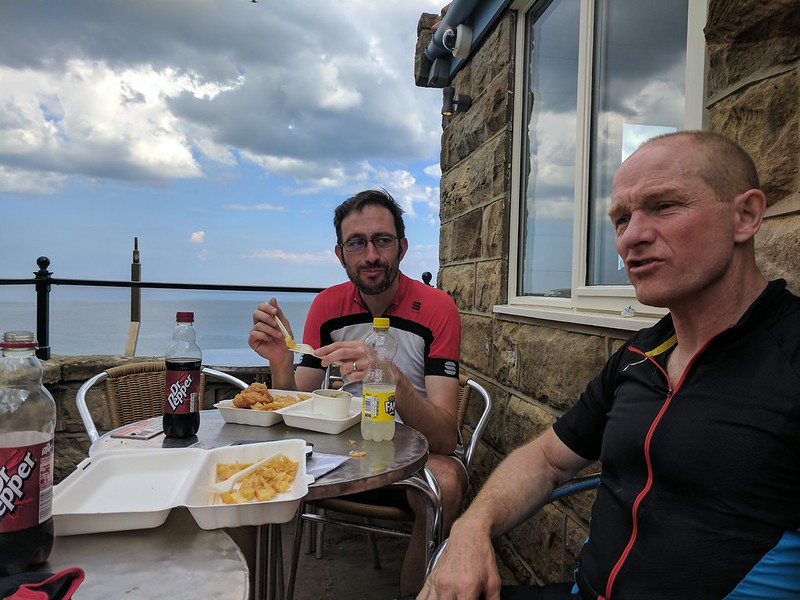 I sort of expected the next bit to be similar to the previous section of climbs through the Moors. How wrong I was. We got on our bikes to leave RHB and were immediately greeted with a long climb of 20-25%. And it got worse after that; I think we tackled 4 30% climbs over the next 20 km or so. By this point, I didn’t have the strength in my lower back to stand on the pedals, and so I was having to take every hill sitting down – I was very glad of my low gearing here. Anything less than 20% started to seem trivial, which is just as well, because I lost count of how many of these we hauled ourselves over.

By the time we reached Rosedale Chimney, it seemed like just another climb. I think this part of the country is testament to the British sense of humour in building roads up hills. In France, Italy, Spain, or practically anywhere else in mainland Europe, the road would wind its way up the side of the hill at a pleasantly consistent gradient of no more than 10%. Meanwhile, in the UK, we just take the most direct route to the top of the hill at a comically severe gradient. No concessions whatsoever.

The final 140 km from Rosedale back to Sedbergh went smoothly, but slowly. By this point in the evening, the wind had died down, and we met up with a few more audaxers, including John R, and we kept the pace up fairly well as we rode through the Vale of York. We parted ways at the Ripon services, and by the time darkness set in, we were starting to get pretty tired. With 80 km still to go, we decided to take a power nap in a lay-by. This didn’t work so well; just as we were drifting off, a well-meaning woman spotted our bikes from her car and stopped to check we were OK. Yeah, we’re fine, thanks 🙁 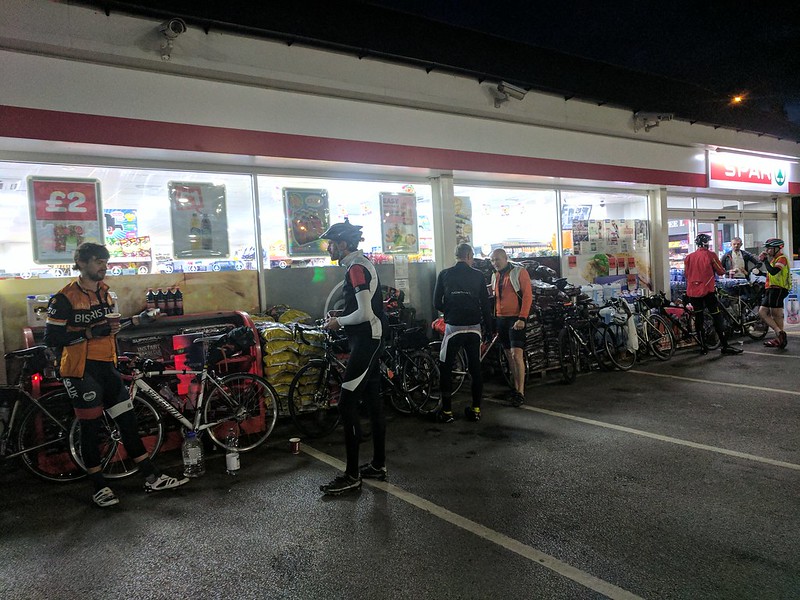 We eventually rolled into Sedbergh at around 03:30, many hours after my optimistic estimate of midnight. My knee was painful, but intact.

Our good luck with the weather finally ran out, and it was raining when I got up at 06:00. My knee was feeling much better, so after some weary chat over pieces of toast and bowls of cereal, I struck out alone at 07:00. My aim was to get to Bispham as early as possible, so as to get as much sleep as I could before the 4 hour drive back to Didcot.

The ride went by uneventfully, but as the rain petered out a nasty headwind set in for the final 20 km. My knee started throbbing again, and the last few km went by quite painfully. I hobbled into the arrivée at Bispham at around 10:00, had a bite to eat, and then went to sleep. Only to be promptly awoken by some impossibly loud snoring. Sigh.

I massively underestimated how slow I would be on this ride. This was a bit silly of me, since I knew from others’ experiences last year that it would be a seriously tough route.

I’m used to riding audaxes as fast as I can, and trying to set a good time. I’d already decided I wasn’t going to do this for the MP1000, partly because I’d never done the distance before, and partly to allow myself some enjoyment. I’m very glad I did it this way, because I probably would’ve bonked pretty badly later in the ride had I taken my usual approach. Riding with Al & Ken on day 3 really helped me get round! On reflection, I probably needed to eat a bit more.

I also realised that setting a fast time on an event like this is more a matter of sleep deprivation than of speed on the bike. That’s a game I don’t want to play, so on my next 1000, I’ll just focus on getting as much sleep as possible (within reason). That will probably mean riding each leg as fast as is practical, to maximise my downtime between them.

This site uses Akismet to reduce spam. Learn how your comment data is processed.